You are here: Home1 / Paraguay2 / Going Paperless in Paraguay

In March 2020, Rodrigo Gonzalez, President of Paraguay’s National Plant and Seed Quality and Health Service (SENAVE), was under increased pressure from the public. The people of Paraguay were calling for less government spending after the country received record-breaking loans related to COVID-19. Gonzalez asked for assistance from IESC’s Technology Facilitating Agriculture Systems and Technology (T-FAST) project. His idea was to comprehensively improve efficiency by combining the often-duplicated resources of SENAVE and Paraguay’s National Animal Quality and Health Service (SENACSA). 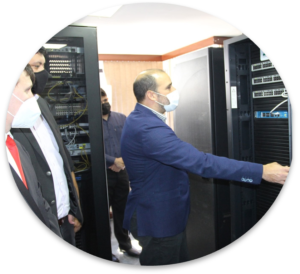 Before T-FAST intervened, importers and exporters released agricultural goods and government officials did several manual checks to ensure the importer/exporter had all the required licenses, certificates, and permits. SENAVE and SENACSA are both connected to the Import and Export Single Windows (VUE and VUI) but used paper-based documents and certificates at border crossings and internal processes. Misplaced documents and increased employee-client facetime, which at times triggered informal expedited payments, led to delays and limited transparency.

Also in March 2020, Paraguay’s congress approved an Inter-American Development Bank loan for SENACSA. Originally, these funds were used to make improvements to SENACSA’s information and communications technology (ICT) infrastructure only. But through multi-agency technical meetings in which T-FAST participated, the project ensured that SENACSA’s ICT procurements could and would be compatible with SENAVE’s systems. At that point, the T-FAST project team conducted backend systems assessments and created a modular action plan to allow SENAVE to continue building their own ICT capacity after the T-FAST initial support concludes.

To further ensure the sustainability of this technology, project staff developed a scope of work for SENAVE to contract ICT support services and source supporting equipment for the servers. Rafael Mendieta, SENAVE’s Director of Information and Communication Technologies, observed, “This new infrastructure will give us scalability, and we will be able to support all our offices throughout the country.”

Now, agriculture and health authorities are using more modern backend systems and databases to issue licenses, certificates, and permits. Digitization of these documents allows the government to be more efficient and effective by automatically cross-referencing and verifying data.

Association of Technical Advisors of Paraguay President David Canela recalled that he used to travel 200km (124 miles) for a test administered by SENAVE to maintain his approval as an Advisor. Now, this same test is available online 24/7 on SENAVE’s Electronic Procedures System (TES). This same website is hosted on the cutting edge hyperconvergence technology provided by T-FAST. For his part, González thanked USDA for this country-to-country collaboration that allows Paraguay to improve its global competitivity through faster and more efficient processes at reduced costs.

T-FAST is a USDA Food for Progress initiative in Paraguay implemented by IESC. The project aims to simplify, modernize, and harmonize agricultural trade processes in Paraguay. The project motivates and incentivizes collaboration across the Paraguayan government, the private sector, and donors to achieve maximum impact; builds organizational and human capacity of the National Trade Facilitation Committee and institutions involved in regulating and facilitating agricultural trade; and addresses Category C Notifications of the World Trade Organization’s Trade Facilitation Agreement (TFA) while fostering a culture of continuous improvement to enable Paraguay’s overall compliance with TFA standards.